Compute the betweenness centrality of each vertex of a given graph. 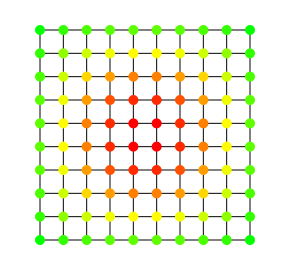 The above graph shows the betweenness centrality applied to a grid graph, where color indicates centrality, green is lower centrality and red is maximal centrality.

This algorithm, by default, stores the centrality values for each edge inside the Cb attribute. You can change this attribute name at construction time.

This algorithm does not accept multi-graphs (p-graphs with p>1) yet.

This algorithm does not take into account edge direction yet.

The result of the computation is stored on each node inside the Cb attribute. You can change the name of this attribute using the dedicated constructor or the setCentralityAttributeName(String) method. 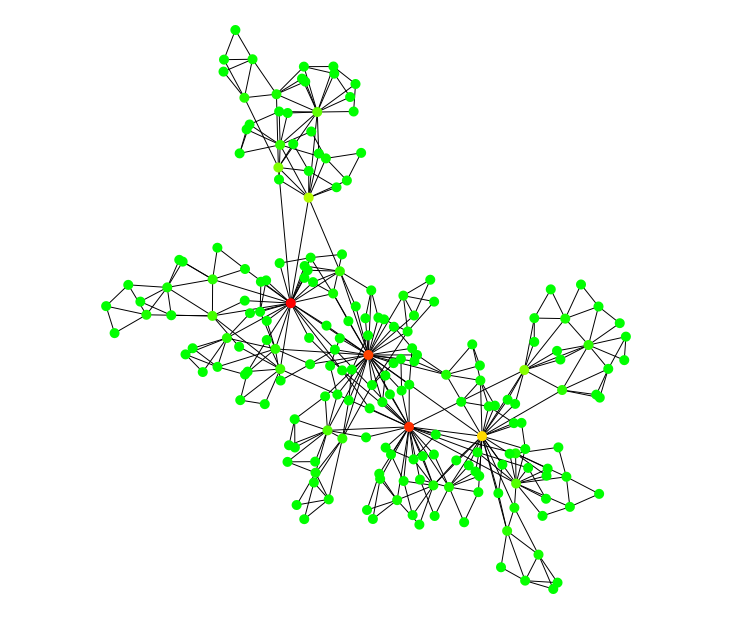 By default the algorithm performs on a graph considered as not weighted with complexity O(nm). You can specify that the graph edges contain weights in which case the algorithm complexity is O(nm + n^2 log n).

Here is an example of use:

This is based on the algorithm described in “A Faster Algorithm for Betweenness Centrality”, Ulrik Brandes, Journal of Mathematical Sociology, 2001:

And in “On variants of shortest-path betweenness centrality and their generic computation” , of the same author, 2008: